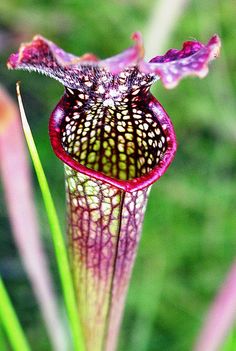 All of the diverse species have in common some kind of a trap for snaring food and digesting it to feed the plant.  The Venus Flytrap has a snap trap that closes quickly when an insect’s movement disturbs sensitive hairs on the trap wall.  Bladderworts have a suction trap that opens like a bladder, sucking water and nearby prey inside the trap.  Butterworts and sundews have flypaper-like traps that use a sticky glue substance to trap their prey.  They sometimes even curl their leaves to block escape by the trapped prey.

Different varieties of pitcher plants have different types of traps.  Some pitcher plant varieties have leaves that are modified into pit-like structures called pitfall traps. Prey fall into the cup-like traps and can’t escape, eventually starving to death.  Some pitfall traps collect water at the bottom of the pitfall so the prey dies by drowning.  These types of pitfall traps are usually hooded on the plant to keep out rain.  The plant maintains the amount of water in the trap by pumping water in or out of the trap as needed.  The leaves may even be able to adjust the pH of the water and secrete digestive enzymes.  Who says plants aren’t smart?

Other pitcher plant varieties have lobster pot traps, so named because, like lobster pots, the trap entrance is easy for the prey to find, but exiting the trap is much more difficult.  There may be hidden exits or backward-pointing hairs that allow the prey to move only back into the trap, not out of the trap.