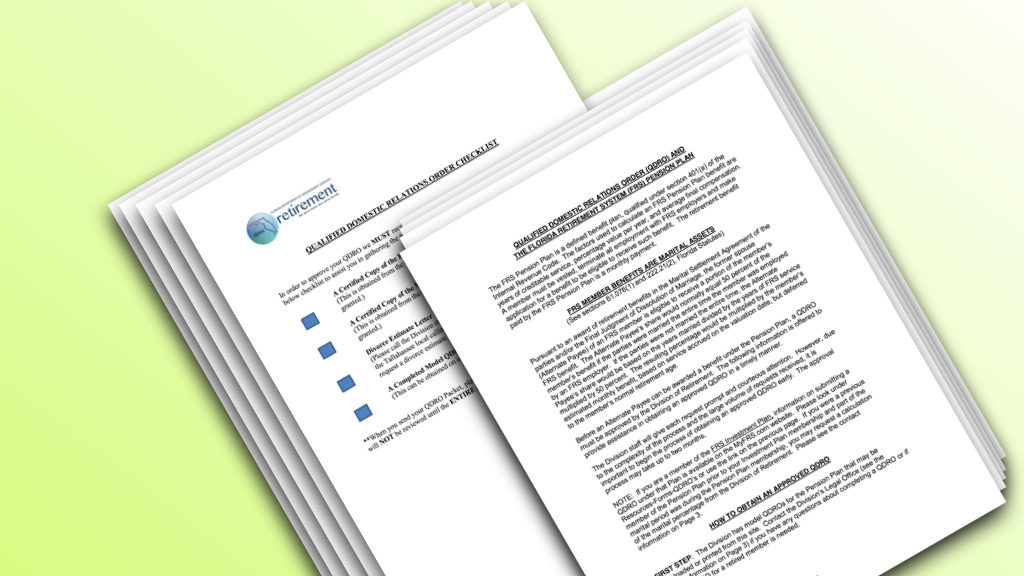 When do you reach the finish line in a divorce? Many people might say it’s the day of your divorce hearing after the judge has signed your decree. It’s true that this is a huge milestone. You’re officially divorced and the agreement between you and your ex-spouse is now legally binding.

But please don’t stop here. Chances are you aren’t done yet. There is going to be some important follow-up work for the divorce agreement to be carried out. For instance, if your ex-spouse agreed to give you full ownership of the marital home, did you obtain a quitclaim deed to take his or her name off the title?

I’d like to talk specifically here about when ex-spouses agree to split part of a pension or 401k. You need to really get this: If you are supposed to receive part of your ex-spouse’s pension or 401k, it isn’t going to magically appear in your account. Repeat: It’s not going to jump over to you on its own. You’ll need to have filed a document known as a QDRO, or qualified domestic relations order, with the retirement plan’s administrator.

Believe it or not, some people have QDROs specified in their divorce settlements, then don’t take that important next step. After the final divorce decree is official, the QDRO must be sent to the retirement plan administrator for approval, and later to the family law judge to be signed.

QDROs are required under a federal law that governs retirement plan distribution and by federal tax law. The documents are highly specific and must be completed precisely.

I’d recommend that your divorce attorney should see this through for you. Your divorce case shouldn’t be closed until after the QDRO has been approved by the plan administrator and signed by the family law judge.

And be aware that the process may take time because plan administrators can be slow in their review. It can take even longer when the document is rejected by the administrator and must be revised and resubmitted.

I understand that divorce is emotionally exhausting and it can be tempting to put off something like a QDRO until “later.” After all, by the time of your final hearing, you’ve been through a lot. But don’t stop before the last requirements are completed. In the long run, you’ll be better off.

I’ve seen clients who waited for years to take care of things that should have been done shortly after their divorces became final. One client only took action when she neared retirement and needed income. It had been years since her divorce settlement and her ex-spouse’s company had gone out of business. She was fearful the retirement assets were no longer available. Imagine the stress! The funds were still there but we had to track down the plan administrator.

Because the terms of your divorce can affect you for a lifetime, you want the best outcome. It’s always recommended to consult with an experienced family law attorney who will be dedicated to your case throughout the divorce process.