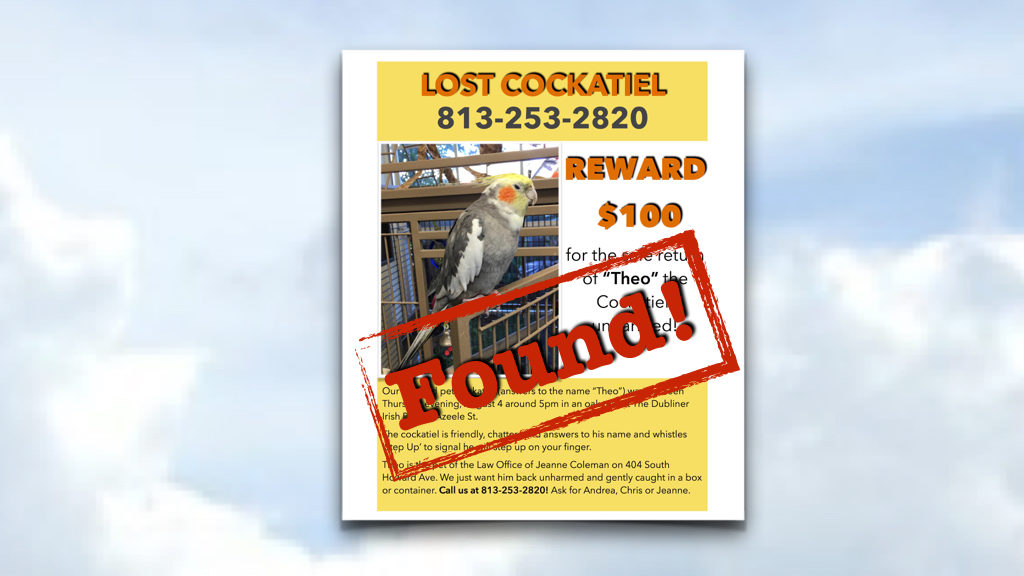 No visit to Jeanne Coleman’s law office is complete without a quick chat with her office bird, a friendly cockatiel named Theo.   Theo first chirped into Jeanne’s life in 2010 as a Mother’s Day gift from her daughters, Laura and Sarah.  He was the store bird at a local pet store where Laura heard him sing The Addams Family and Andy of Mayberry theme songs.  Laura talked the store owner into selling him to her and her sister!

Theo immediately started commuting with Jeanne from home to office and soon learned to say “step up, Theo”, “come here, Theo” and “pretty bird Theo”.  He refuses to learn to say “adios”.  Maybe that’s why this story of Theo’s recent escape into the wilds of S. Howard Avenue has a happy ending —- “adios” is just not what Theo is about!

Here’s a recounting of Theo’s Great Escape three-day fly-about fling last week.  It was quite the work-week wrecker for Jeanne, Chris, Andrea, Steve and friends.  We still aren’t sure what it was for Theo — a bid for freedom or a three-day fright flight?   Read it and decide for yourself.

Last Wednesday, Theo was hanging out with Andrea at the office while Jeanne and Chris were away.  Theo likes to run into the little hole under Andrea’s desk telephone and peck mischievously at her hand when she moves her computer mouse — it’s one of his favorite games.  He disappeared for a little while, but Andrea could hear him down the hallway.  When Jeanne and Chris came in the back door of the office, Theo must have seen his moment and seized it — he somehow ducked out the back door without anyone seeing him leave.  His Great Escape had begun.

In the meantime, Jeanne, Chris, and Andrea became frantic when they realized Theo was missing and a careful search of the office was unsuccessful.  Jeanne was heartbroken, fearing that Theo had hidden himself away somewhere in the office either as a prank or because he was ill or dying. That night, Ken, Jeanne’s longtime office-cleaning guru, patiently pulled every single book off of the shelves in case Theo was hiding behind one of them.  His sad report to Jeanne — no Theo was found.

Thursday morning was a time of grief for everyone.  Not only losing Theo, but not knowing what happened to him was very difficult.  Jeanne was heartbroken, missing the joy his presence, his songs, and his little bird expressions brought to her every day.   At noon, Andrea left for lunch and heard Theo chirping in a tree in the parking lot.  Everyone was so excited and grateful and sure that Theo would be back in the office very soon.  But Theo had other plans.  When Jeanne, Chris, and Andrea stood out in the parking lot calling and whistling to him to come down, he flew higher into a tree near the building next door.  Was it freedom or fright that drove him further away?

Jeanne’s husband, an engineer, was called in to help plot a recovery plan for Theo.  A ladder was borrowed from an adjacent business and they climbed onto the roof of the building next door to get closer to Theo.  Again, all their words of encouragement fell on deaf bird ears. Theo would not budge.  Was it freedom or fright that kept him immobile in the tree?

Another friend, Eddie, Jeanne’s tree man, was called and asked to bring over a cherry picker or ladder.  Like Steve, Eddie dropped everything and came with a 30 foot ladder.  He set it up, climbed it, and grabbed a branch near Theo’s perch in the tree.  Theo exploded out of the tree, flew up over the power lines and down S. Howard Avenue to the Dubliner bar across the street.  Jeanne went searching for him and found Theo chirping high up in a tree over the bar.  Chris joined Jeanne at the Dubliner, but once again, they were unable to coax Theo down to safety.  Was it freedom or fright that kept him high up in the Dubliner tree on a stormy night filled with heavy rain, thunder and lightning?

Friday seemed to be headed into a repeat of Thursday.  Theo returned during the night to a tree close to a nearby shop parking lot, but continued to rebuff all pleas and efforts to coax him down.  His cage and food were placed in the parking lot beneath the tree.  Steve built a long perch out of pvc pipe and climbed to the roof of the shop to try to get Theo to step onto the perch.   Theo just kept flying to different branches of the tree —- always out of reach.  Freedom or fright?

Everyone was feeling the strain of Theo being so uncooperative with his own rescue and fear that he couldn’t survive much longer without food and proper shelter.  At one point a hawk swooped down to rest in the top of the tree.  Theo’s instincts kicked-in as Jeanne watched him become immediately silent and immobile, not even moving a feather on his top knot.  Jeanne was terrified that the hawk would spot Theo’s bright yellow color and grab him in its talons.  The hawk soon flew away. Theo’s instincts had saved him, but how long could his safety continue?

Late in the afternoon, Jeanne’s daughter, Sarah, came by to lend her support.  She stood at the bottom of the tree and talked and whistled to Theo.  This time he listened.  He walked across his tree limb and down the tree using his beak and jumped right onto Sarah’s extended finger.  If it was freedom keeping Theo up in the tree before, he had finally had enough.  If it was fright keeping him outside for two nights and three days, he had finally decided to overcome it and move to safety.

Patience, persistence, the support of friends and family, and Sarah brought Theo back to Jeanne’s office.  After sleeping a lot over the weekend, he’s doing fine after his Great Escape  —but he likes to stay inside his cage now, even with the door wide open.  Freedom or fright?  You be the judge.

Jeanne Coleman is a family law attorney, social security disability attorney and dependency attorney who has practiced in the Tampa Bay area for over 25 years.  Jeanne is a highly experienced litigator and also offers collaborative divorce services.  Jeanne will provide a free 20-minute consultation by appointment — and you can meet and greet Theo while you’re there!  He seems very glad to be back on the job as office bird.  Call today for your consultation.