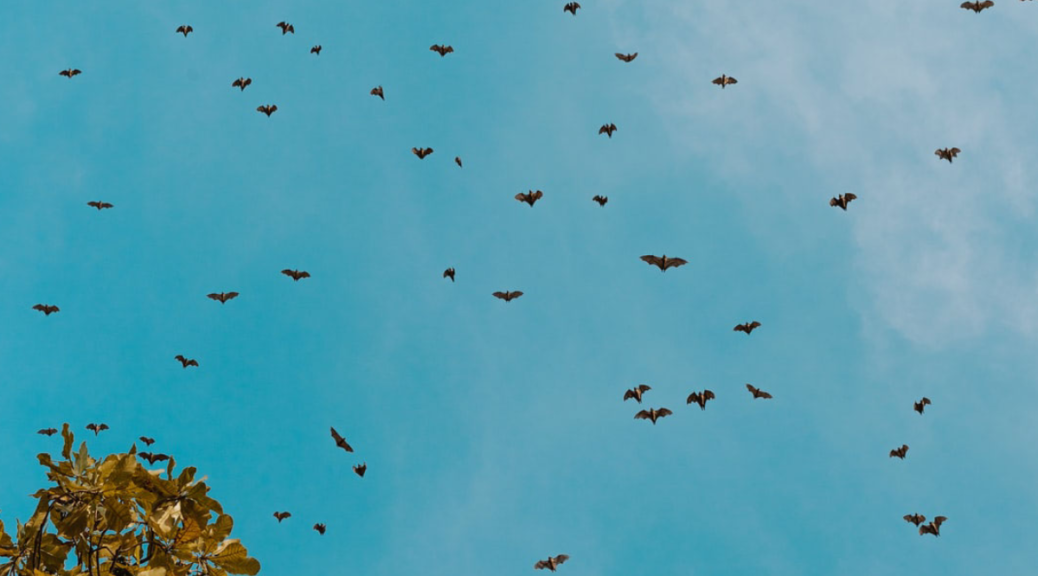 One evening I was grilling on the patio at home and heard slap-slap-slap sounds. I had no idea what it could be, and it took me awhile to figure out what was happening. Once I did, I was astonished. And thrilled!  That sound came from bats taking flight!

About three years earlier, my husband and I had erected a triple-chambered bat house in the back yard. He’s a skilled woodworker and constructed it according to bat-friendly specs. Bat houses are narrow and installed on a very high pole. They are meant to mimic a bat’s natural habitat, such as the space between peeling bark and a tree trunk. We also added a bat house in the native plant garden behind my office.

I became interested in bats and their effect on our environment when I heard a speaker at a joint conference of the Sierra Club, Audubon Society, and Native Plant Society. I learned that bats are nature’s insect removal teams. In one night, a single bat can take out 3,000 insects. In Florida, where mosquitos swarm, that’s a plus. Sadly, though, much of Florida’s natural bat habitats have been overtaken by development – which is why I wanted to erect bat houses.

It can take years for bats to move into a bat house and we knew to be patient. So, it wasn’t until I heard the slapping sound that I was alerted to our new bats-in-residence. We have a Spanish-style, barrel-tiled roof and apparently, it’s perfect for bats. A little after sunset on my patio, I spotted a bat – a small creature that slipped out from underneath one of the tiles. The slapping sound was the bat hitting the house.

I don’t know if bats first moved into our specially made bat house on the high pole. And then invited all their kin to take up residence and the house overflowed. At any rate, bats apparently view our property as “bat-friendly.” A plethora of bats now live not only in the official bat house but also underneath our roof tiles. I’ve enjoyed watching them emerge from the barrel tiles, just after sunset, and fly into the dusk. Like clockwork, they’re “home” near sunrise to return beneath the tiles.

I’ve estimated up to 250 bats may live on our property. So, figuring that one bat can down 3,000 insects per night, that’s a lot of mosquito control!

I like the fact we’re contributing to bat habitats. In this way, we’re connected to a bit of old Florida, too. Years ago, people in Temple Terrace built a large bat house to fight mosquitoes. That structure is long-gone, but a short documentary is worth watching on YouTube. For more information about bats in Florida, visit the Florida Bat Conservatory website. And if you’re ever in Gainesville, don’t miss the “The World’s Largest Occupied Bat Houses” at the University of Florida where thousands of bats have become a tourist attraction and put on a show every evening at dusk.

Jeanne Coleman and her staff help clients navigate divorce and other family law matters in ways that lead to new and better futures. For a free, 20-minute consultation, call 813-253-2820. Please note, a free consultation does not establish an attorney-client relationship.