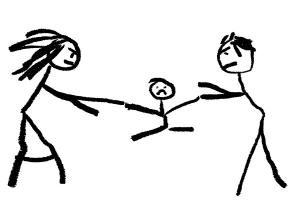 This is a complex and emotional question for many parents, but it has a relatively simple answer: very rarely. There are so many reasons a parent may be tempted to refuse the other parent’s timesharing. Perhaps it’s just occasionally when, for example, the child has a special occasion that he/she really wants to attend but that the other parent can’t/won’t agree to. It could be a more ongoing problem of poor communication between the other parent and the child. This may be coupled with the child’s constant reluctance or refusal to spend court-ordered time with that parent. What’s a parent to do?

Stay firm. Maintaining a consistent court-ordered timesharing schedule is not “optional” just because timesharing has hit some of the inevitable bumps between the other parent and child. Help the child understand, in an age appropriate way, that this is not your decision, the other parent’s decision, and certainly not the child’s decision, but an order of court that must be followed until its changed by the court if warranted by the circumstances. Encourage the child to try to work out any perceived problems with the other parent by talking with that parent, but at all times, be clear with your child that the timesharing schedule is non-negotiable.

The only exceptions are when the timesharing actually poses a real threat of harm to your child. If the other parent shows up intoxicated or high to pick up the child, obviously the child would be endangered to get in that parent’s car for visitation. If the other parent is threatening the child with domestic violence, the child should not be forced to go with that parent. Keep in mind, however, that this sort of “self-help” should be immediately followed by actively seeking court intervention to maintain the safety of the child. Remember that only another court order can legally relieve you of your obligation to follow the current court-ordered timesharing plan.

If you or someone you know is having custody or timesharing issues, contact an experienced family law attorney.